A Beaut of a Cover 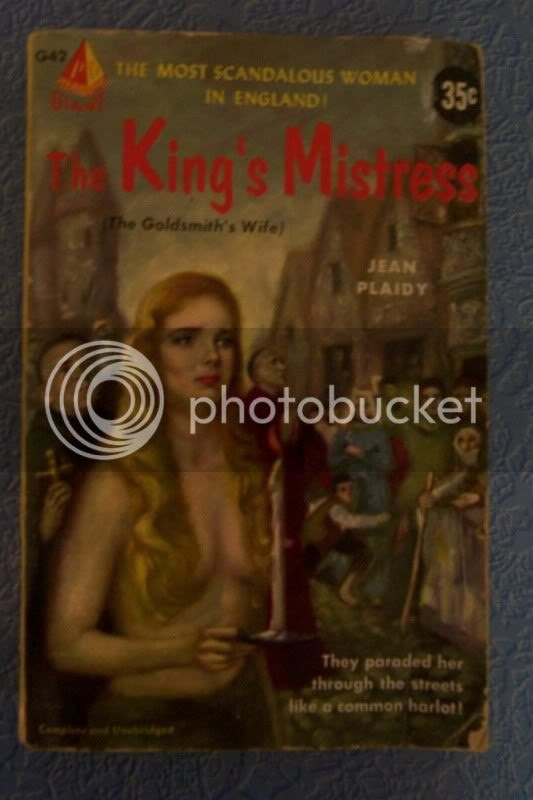 Now, if Jean Plaidy's name wasn't on the cover of this 1952 paperback (a Pyramid Books Giant), would you have guessed who wrote it? Be honest, now.

The front cover isn't the only fun thing about this historical novel (about Jane Shore, of course). The back cover teases us with "From the king's boudoir to a prison for prostitutes!" Inside, there's a short biographical note stating that Jean Plaidy became "a best-selling novelist after successive steps as a secretary, rare gem salesman and housewife."

The back contains even more treats. For those who didn't have the nerve to walk into a bookstore, the publisher offered order coupons to order titles such as Cage of Lust ("The stark human drama of a love-starved young girl's passion and torment for her own father"), Teen-Age Vice! ("Inspired by J. Edgar Hoover of the F.B.I., this book rips the veil off the vice racket, juke joint binges, cabins for the night, prisons that pervert, the smut peddlers, lonely heart clubs"), and The Moonstone by Wilkie Collins. No, I don't see the connection between Wilkie Collins and Teen-Age Vice! either, except that in 1952 they each cost 35 cents, plus 5 cents for postage and handling.

Things get even cheaper on the previous page, with 25-cent offerings such as French Doctor ("His lady patients tempted him!"), Palm Beach Apartment ("Strange love story of a young girl and her benefactor!"), Farm Girl ("In the city--they would have called her a juvenile delinquent!), The Divided Path ("The story of a homosexual!"), and Blonde Mistress ("Daring expose of illicit love!). Somehow, Guy de Maupassant squeezed his way onto this page with The House of Madame Tellier and Other Stories, which merited the feeble blurb of "An exciting collection by the famous French storyteller!" Coming between Chain Gang ("Our most brutal prison system!) and Swamp Girl ("She had to choose between white man and black!"), poor Maupassant didn't stand a chance.
Posted by Susan Higginbotham at 11:22 PM

Wow, what a cover! I have this book, but under the title "The Goldsmith's Wife," and the cover art is less lurid, although if you look closely you can still see her topless in the background. The story itself is really good.

What a spectacularly lurid cover! I'd never have guessed it was Jean Plaidy.

That's one of the most lurid examples I've seen. I'd feel sorry for Ms Plaidy, but she probably sold a lot of books.

I have that book. The cover is nothing like that and it is called the Goldsmith's Wife.
Susan

I did a double take when I saw this one eBay when I was searching for Jean Plaidy novels!