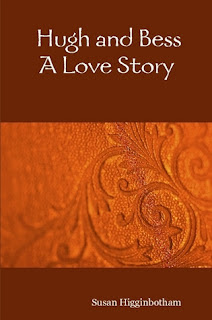 It's here! My sample copy of Hugh and Bess: A Love Story came in the mail on Saturday, and it's now available to order here, either as a trade paperback or as an electronic download. It hasn't gone live on Amazon or Barnes and Noble yet, but I'm hoping it will be within a couple of weeks.

It's going to be strange writing a book that doesn't have a Hugh le Despenser in it! My next book is very much in the beginning stages, but it's set in the Wars of the Roses and will likely be narrated by Katherine, Duchess of Buckingham, sister to Queen Elizabeth Woodville and wife to the Duke of Buckingham, the man who helped bring Richard III to power and then lost his head when he joined a rebellion against him. It promises to be fun--especially as it won't have a saintly Richard III. (And Richard III's queen was a direct descendant of Hugh le Despenser the younger and Eleanor de Clare through their second son, Edward, so I won't be totally Despenser-less.)

For you folks who voted in the poll that I should do a book set during the Barons' Wars, don't despair, I may get to that one eventually! But if you voted for the chick lit option, you might have a long, long wait.
Posted by Susan Higginbotham at 8:46 AM

Email ThisBlogThis!Share to TwitterShare to FacebookShare to Pinterest
Labels: Hugh and Bess

How exciting for you!! When it comes up on Amazon, I"m going to order one - I still have that gift certificate from the Historical Fiction forum that I haven't spent yet.

And I think your next book sounds fascinating as well. One of the things I really like about the books you've written is that you do them from a new point of view and introduce us to people we haven't heard much about.

I second Daphne that the next one also sounds interesting. Is the Unromantic Richard III blog the research notes? (Re the absence of the chick-lit option, let's say I can bear the disappointment :-). I now can't remember which option I voted for, but it wasn't that one!)

How exciting! Congrats! I'll look for it on Amazon.

I voted for the Baron's Wars, but I'm happy to see you are approaching the Wars of the Roses from a new angle (and that you won't have a saintly Richard III).

Congrats on another great novel, and looking forward to the next one!

Thanks, all! (Hope no one is too disappointed about the chick lit--I couldn't afford all the shoes I'd have to buy for research.)

The Unromantic Richard III blog is sort of the research notes, I guess! It's been quite helpful for figuring out what interests me and what I'd like to write about.

LOl, I'm so going to miss a novel with girls discussing various undergarments. ;)

Congrats on getting the book out.

Congratulations Susan! Sounds like an interesting book, as does your next one. I'd totally forgotten that Elizabeth Woodville's sister was married to Buckingham (all those different Buckingham's over the centuries can get confusing)