Maybe you've been like the guy below, saying to yourself, "Gee, I wish I knew more about Richard III's mother-in-law, Anne Beauchamp, Countess of Warwick. I wonder where I could find out more about her." (Admit it. Of course you've been thinking this. It's been tearing at you this entire summer.) Well, ponder no more, but venture over here in my website, where you'll find a nice long piece about the countess. You can also find a piece about everyone's favorite bareback rider, Lady Godiva, written by novelist Octavia Randolph, and about everyone's favorite extortionist, Hugh le Despenser the younger, written by Alianore. (And since Hugh was also a pirate, you can get your summer pirate fix without even having to pay for movie admission and popcorn.) 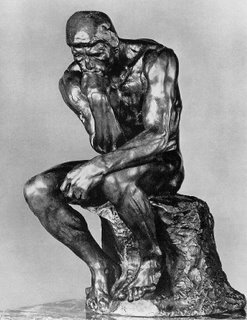 Anyway, Carla posted about her five favorite historical novels, and invited others to join in. So here are my five, with the caveat that I tend to read only about people and time periods I'm interested in and therefore have undoubtedly missed some of the greats. (And though I've made a selection, it's not set in stone, or bronze for that matter; next week I could have five different choices.)

1. A Tale of Two Cities. This and Barnaby Rudge (which is hard going even for many Dickensians like myself) were Dickens's two ventures into historical fiction. Yes, there are some cloying bits, but you gotta admire a guy who goes to the scaffold all for the sake of the woman he loves.

2. Gone with the Wind. Granted, some of the racial stereotypes are cringe-inducing today, but this novel by Margaret Mitchell has two of the most memorable romantic leads ever created, and the other characters are equally compelling, as is the plot. (And though my ancestors fought for the South, I'm quite happy that the North won, so this isn't the view of a diehard Confederate.)

3. A Tree Grows in Brooklyn. I read this Betty Smith novel during the same summer I read Gone With the Wind, right after eighth grade, and I count these two books as my first real venture into adult reading. I'm not sure this strictly counts as a historical novel--it was written in the 1940's and is set in the early part of the century. Still, it's a wonderful story of a young girl growing up in turn-of-the-century Brooklyn, and as America changed a great deal between the time in which it was set and in the time in which it was written, I'm going to count it as historical fiction. So there.

4. Sharon's Penman's trilogy of Here Be Dragons, Falls the Shadow, and The Reckoning. Some authors can take real historical characters and make them as dull as dirt--an amazing feat when you think of it. Penman's characters, on the other hand, are fully rounded, so much so that I find a few of them, like Joanna in Here Be Dragons, to be downright exasperating. That's a compliment; one gets bored with cardboard cutouts, but never exasperated.

5. Sandra Gulland's Josephine Bonaparte trilogy. It's difficult for an author to make the journal form work, but Gulland does. Josephine is a compelling heroine without being a politically correct "strong woman," and the book is lit up by a nice sense of humor.

Others I've really liked? Margaret George's The Autobiography of Henry VIII, Jean Plaidy's Murder Most Royal and The Queen's Confession, Brenda Honeyman's The Queen and Mortimer, Pamela Bennetts' The She-Wolf, and Reay Tannahill's The Seventh Son. Just to name a few.

(Oh, and I liked The Traitor's Wife: A Novel of the Reign of Edward II also, by good ol' whatsername.)
Posted by Susan Higginbotham at 8:27 AM

Nice article! I've read Wife to the Kingmaker and don't remember Anne being very sympathetic - it's been a while, though.

I'll get to my own top 5 novels sometime soon.

Thanks, Sarah! Anne starts out in the novel as a spoiled brat and becomes somewhat more sympathetic as the novel progresses, but the change isn't explained all that well.

Why do you find Joanna in Here Be Dragons exasperating, Susan?

Mainly because of the incident where she goads Gruffydd into the rage that gets him imprisoned by his father. Oh, I know why she does it, but it still gets me annoyed with her every time I re-read it. I keep hoping she'll have mended her ways between readings. :)

She pays for that incident, doesn't she? If I remember rightly it's part of the events that lead to her disastrous affair and nearly to the breakdown of her marriage.

Oh, yes! All the more reason why I wish she'd keep her mouth shut. I usually find myself siding with her husband in the novel. (I think the fact that I want to take sides shows the skill in characterization here.)

I tend to find myself on Llewelyn's side too, most of the time. And yes, I'm sure you're right.